What happens at a mindfulness class? 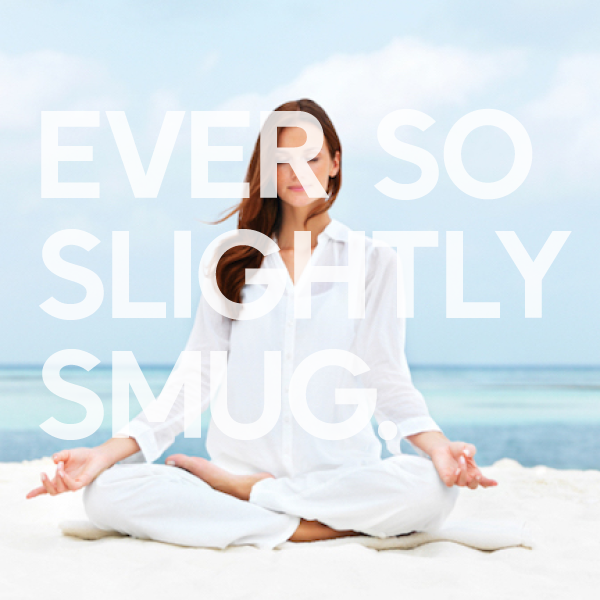 Thinking about coming to a mindfulness class? If you’ve not been before, you might be put off by sunrise-lit images of shiny, bendy people sitting on mountain tops with looking smug (Google ‘meditating’ images and you’ll see what I mean); or by the prospect of sitting, completely still, in silence for an hour; or by the idea of a pseudo-spiritual, self-styled guru chanting at you and making you squirm.

I don’t want to disappoint but, you can sit on a chair, in a Manchester pilates studio, with grey skies outside. We do lots of different short practices and I might sneak in the odd poem, but sadly my guru status has not yet been bestowed. I’m actually a fairly flustered graphic designer who owes a lot to mindfulness. And I don’t do chanting.

What do we do?

1. We usually start with a brief exercise to help switch off from whatever we were doing before we got to the class. To shake off (sometimes literally) some of the stresses of the day and get out of our heads. This may be a quick breath meditation or a bit of moving about.

2. We’ll briefly explore a mindfulness idea or concept. This could be something like working with thoughts; or our brain’s negativity bias; how our habits control us; how we can cultivate kindness; or maybe quietening the self-critical voice  that unhelpfully commentates on our every move. Fun stuff.

3. A short (10-15 minutes) meditation sitting down – on the floor if you’re comfy down there, or on a chair. I’ll guide you through it and we generally have a focus  or an ‘anchor’ such as the breath, sounds or thoughts. The idea of a seated meditation is that we’re chilled but not catatonic. We’re still, but active. Relaxed, but alert. This makes more sense when you do it.  But basically I encourage you not to lie down (yet) as paying me to have a nap on the floor doesn’t seem great value for your money.

4. After each meditation, we’ll have a debrief about what happened while we were doing it. If this sounds worryingly like audience participation and makes you want to run for the meditation hills, don’t worry, it’s not compulsory and once you’ve got the hang of it, it’s a really valuable way of developing your mindfulness muscles and one of the best things about doing mindfulness with other people rather than in the solitude of an app

5. And now you’re allowed to lie down. At some point in class we usually do a meditation practice lying down. (if this feels like a good, safe idea for you. If not, sitting is fine).  This will often be a ‘body scan’, where I’ll invite you to lie back, relax and pay attention to the different sensations in different parts of the body. Might sound a bit odd, but it really helps bring us firmly into the present moment. Not lost in the past or stressing about the future. Calm, yet awake to what’s happening… which is kind of what mindfulness is all about.  Alternatively, it’s a good opportunity for a lovely kip if you can tune out of my droning in the background.

6. Then you get to go home. Hopefully a little bit calmer, with the chatter and clatter in your head a bit quieter and feeling a more ready for whatever your life chucks at you next. Not smug though.

Come and join us

Have a look at classes